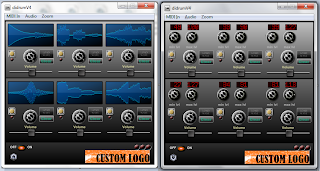 About a year ago one of my friends was tinkering with arduino and how to make a drummachine. The hardest part was to think about how to connect it with a computer or telephone. Well.. i still dont know about telephone, but connecting such external devices with computer needs an understanding about how the communication will be. As my friend was working with arduino, there is a small problem for him - in easiest and cheapest circuit arduino works only through serial communication.
I started wondering around and found something similar to arduino called - Teensy. It has usb implemented in itself, even better - through ide it is possible to set the type of the device. In our case the device should be... super simple midi device. As I knew something about synthesizers (actually I dont but he thought so) and I was encouraging him to try to find a way make that arduino speak "in MIDI", knowing that such thing will allow connect it with any sampler or specifically build synthesizer for it.
As I was tinkering before with Outsim Synthmaker, I offered to build a software demo version of such a sampler (download here exe and dll version). I never worked with samples in Synthmaker before, so this task was kind a challenge for me. After he defined what he wanted, I made little 6 sample midi sampler starting with C3 key. It has implemented release - so it will sound 30% after after releasing a key.
It can load samples and it shows loaded samples in GUI. It has 3 classes of loudness which are adjustable with two knobs for each sample. Each sample is testable directly in GUI and for each there is main volume and pan option.
Autors: Lauva plkst. 06:56