Bad FAU (film adapter unit) cable.
The scanner worked fine while scanning some documents and stuff. When I tried to scan some diapositive films, i got an error 2 178 0. In some forums people say it is because of cable. Tried to find some schemes, but unsuccessfully. Got another, working cable and additionally I made the scheme of the cable.

In my case the wires 8 and 9 was broken. The interesting part was that it was possible to avoid the error by putting the FAU in the start position manually by hand. When I launched preview, the error was gone and i got a preview of my diapositive. And then it stuck in the end - servo motor didn`t put the FAU in the start position. I realized that something is wrong with 1)electronics or 2)cable. With other cable scanner worked fine, so it is not electronics. And here it is - the wire 8 which eventually was broken is FAU (go) HOME. But still I have another wire - 9, which is FAU (gives) POWER. Could it be that FAU doesn`t get the power from it and takes power from wire 10? It seems possible, because I got it working with broken cable when I manually put the FAU in start position. The lamp was shining and the unit worked ... till it had to "go home" :D 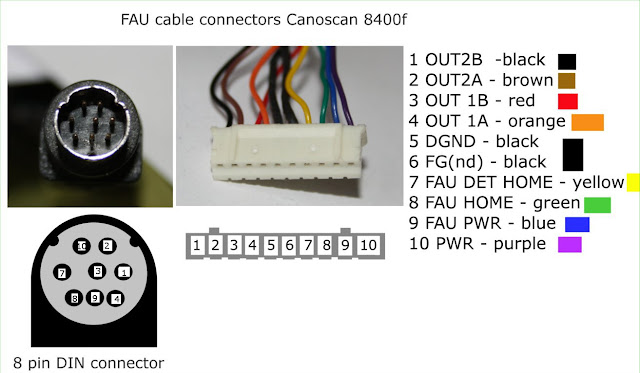